Medieval Weapons of the Marathas : Terminology 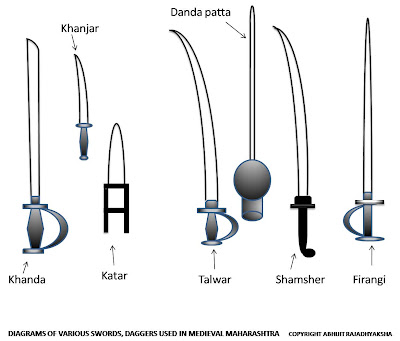 The Marathas by their valour, ferocity and martial skills, have traditionally been a warrior force to reckon with.
In the 18th century, they created a large empire encompassing a major part of Deccan and central India (besides strong influence in regions of northern and eastern India).
The marathas relied mainly on their infantry and cavalry during war.
The mountainous terrain of the Sahyadris made the Marathas a strong, nimble footed and athletic lot.
The terrain also made them use  light weaponary especially during the gureilla type of war that they fought. This enabled them to make quick movements and swift strikes on unsuspecting enemies and then disappear  into the darkness of the night or the shield of the thickly vegetated mountains during the day, (before the enemy could gather their wits).Ofcourse, with increase in their military power, their gureilla style often made way for the open pitch style of warfare. It also brought in a certain amount of sophistication in their weaponary.
Some of the medieval weapons traditionally used by the Marathas were the variants of swords like the talwaar, the firangi, the khandaa, the paataa ,and the variety of daggers like the kataar,  the shamsher,the jaambiya . Also prevalent were the ancient  bhaalaa (spear), dhanushya baan (bow and arrows), kurhaad( battle axe), parshu (axe variant), gadaa / gurz (mace) or unique weapons like the waagh nakh (tiger claws).
These weapons were made as per the quintessential designs borrowed  from the Rajputs, the Mughals,the Persians,the Afghans  and the Europeans. But were often modified to suit the Maratha style of martial art.

Anatomy of a sword 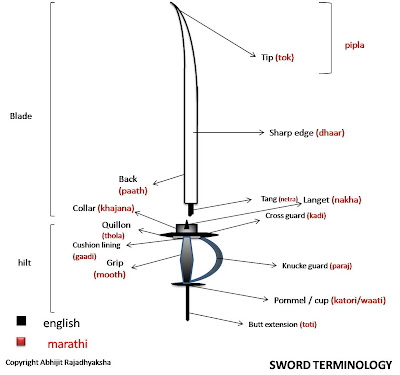 Talwar is an Indian sword, with a curved blade, with the hilt covered by the enclosed flange, which extends from the guard to the pommel. It is often double edged and having a pointed tip. The talwar was used by both the infantry as well as the cavalry  because of its effective draw cut. The handle of the talwar often displayed intricate engravings.
Firangi is an sword with a long straight heavy blade like its European counterpart and a pointed tip. It has a full sharp edge on one side and the other side has around six inch sharp edge.It was used by the cavalry.The hilt has a knuckle guard (basket hilt). Shivajis famous 'Bhavani ' & 'Jagdamba'  talwar were styled in this fashion.
Kirach is an sword similar to the firangi, except that the blade is broad, single edged and comparatively short and having a basket hilt.
Shamsher is a sword in its Persian form. The blade is generally curved (but also straight and double edged) like the talwar but less wide. It has a slash cut operation. There is no pommel and the hilt continues in a curve. 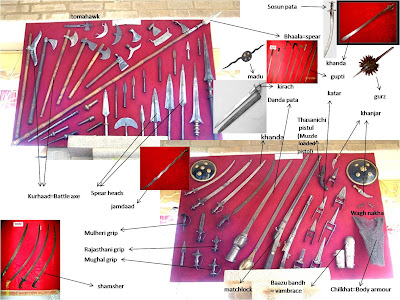 Khanda is a sword used in hacking operations. It has a wide blade that broadens in length and is double edged with a flange connecting the guard to the pommel and covering the hilt.The tip of the blade is not  distinctly pointed.
Sosun Pata was a serated recurved blade with a pommel and a knuckle guard.
Danda Pata is a sword that gets integrated in a gauntlet. The blade is often long and flexible (varchi) and tied as a belt and whisked out when wanting to be used. Its long blade was fiercely waved in a circular eliptical motion to keep away the attacking enemy. It was said to have been famously used by Baji Prabhu Deshpande to ward off the Siddis army, giving his master Chatrapati Shivaji enough time to escape the fort. Adilshahai general Afzal Khans bodyguard Syed Banda was said to be a expert with this weapon.
Jamdaad  (literally means Yamachi daadi or beard of Yama, the lord of death n the underworld) is a double edged snake like wavy sword. It was one of the swords gifted by Mughal commander Diler Khan to Shivaji during course of negotiations.It was also carried by Afzal Khan when he went to meet Shivaji at Pratapgad.
Khanjar is a dagger originating in the Arabian regions, which found its way to India. The blade is short and double edged. It is carried in a engraved sheath.
Kataar is a type of a short punching dagger with a horizontal ‘H’ shaped handle.Used when the enemy is close.It often opened displaying two more blades.
Katyar is a dagger with a curved blade to first stab and twisted around for maximu damage.
Guptis were poined swords with straight blades concealed in a scabbard resembling wooden stick .


Bhaala is the marathi term for a spear. It was a wooden shaft with a sharp mettallic head.It was used both by the infantry as well as the cavalry. The cavalryman used to throw the spear at the enemy and then followed it up by whisking out the sword.
Kurhaad is the marathi term for a battle axe. It has a lunar shaped sharp edged small metal toolhead mounted on a wooden shaft.Its variant was the ' parshu' an axe with a sharp broad semi lunar shaped blade and pointed curved hook at the other end (the curveed hook wasnt present on the kurhad.
Gurz is a mace like iron club with spikes used to strike on a enemy wearing a helmet and armour.
Madu was a shield with a handle and two pointed antelope horns protruding from both sides. 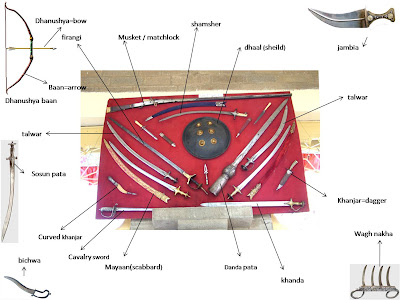 Bichwa  is a doubly curved doubly edged S shaped bladed dagger with a looped hilt.
Jambia is a short dagger that originated in Yemen having a curved steel blade. The hilt was often called a saifani hilt and was made of rhinocerous horns. The sheath was made of wood.
Dhanushya Baan is the term for a bow and arrow. The bow is a flexible wooden arc with a strong string tying its both ends. It propels a arrow that acts as a projectile hitting a target.
Waagh nakha was made famous by Ch.Shivaji maharaj when he used it to disembowel the mighty Afzal Khan. It acts as a ring like weapon that fits around the knuckles. It remains concealed when the palm is closed but when the palm opens it reveals barring out sharp edged pointed claws made of steel that can tear apart the human body.